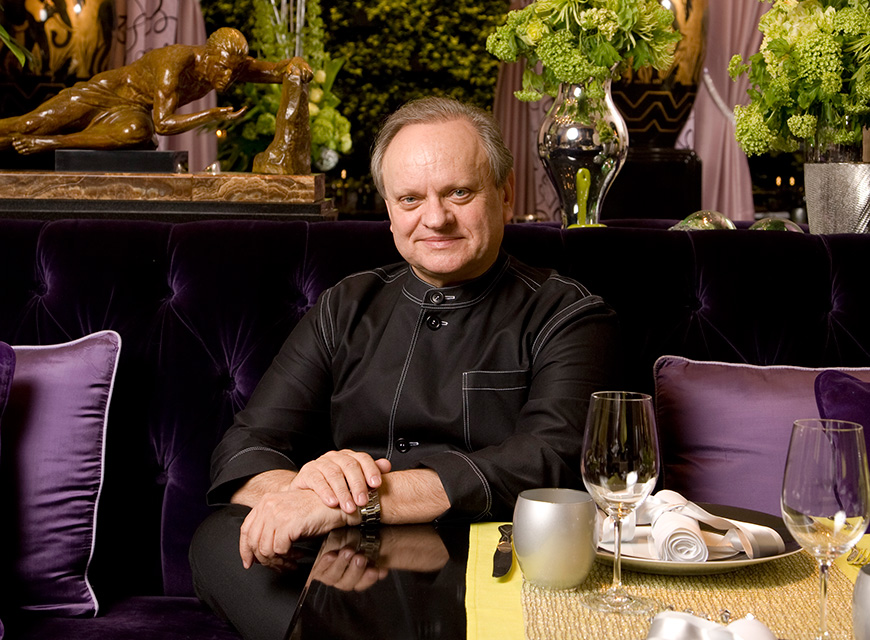 Joel Robuchon, and L’Atelier de Joel Robuchon are two of the most sought after restaurants in Las Vegas. Photo courtesy of MGM. 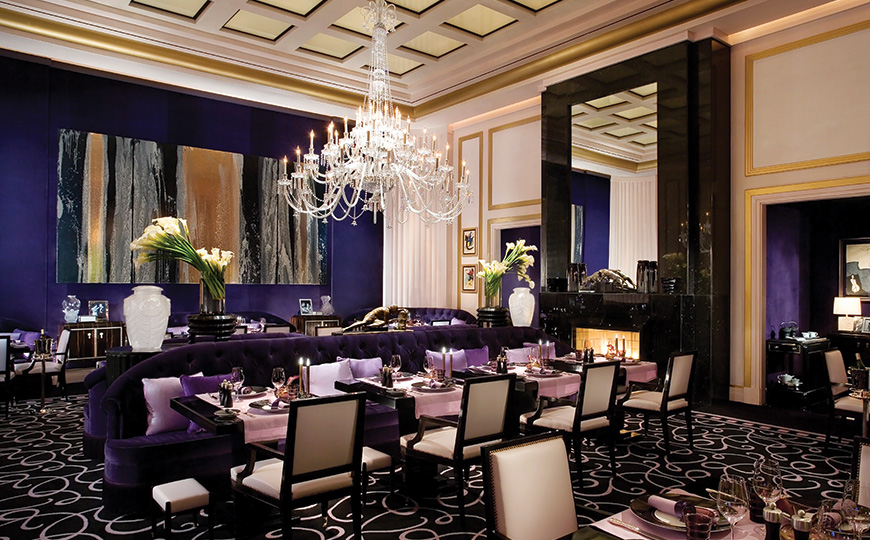 A coveted table at Joel Robuchon, located in the MGM Grand, can be equated to hitting the jackpot. It’s formal, fabulous and a feast fit for a queen. Photo: MGM Grand 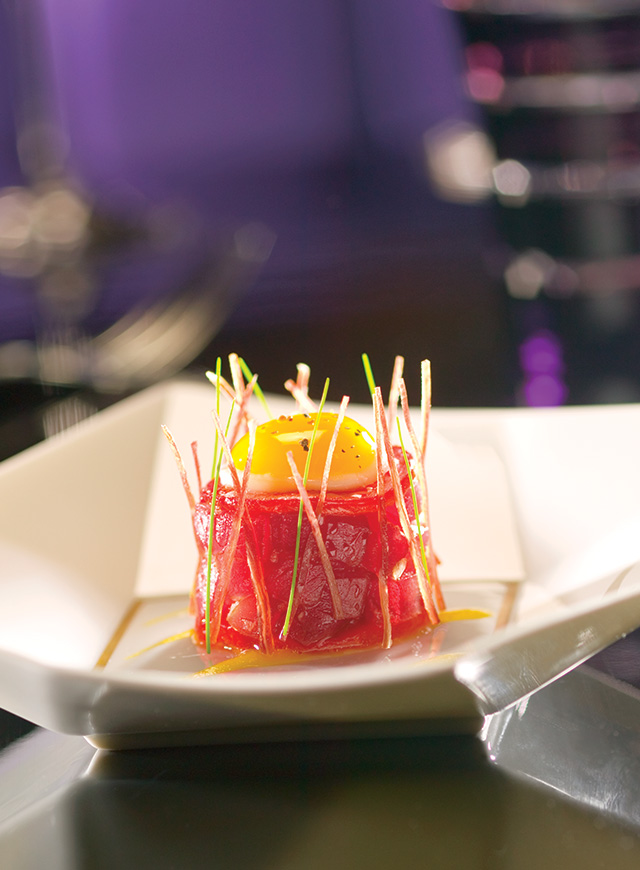 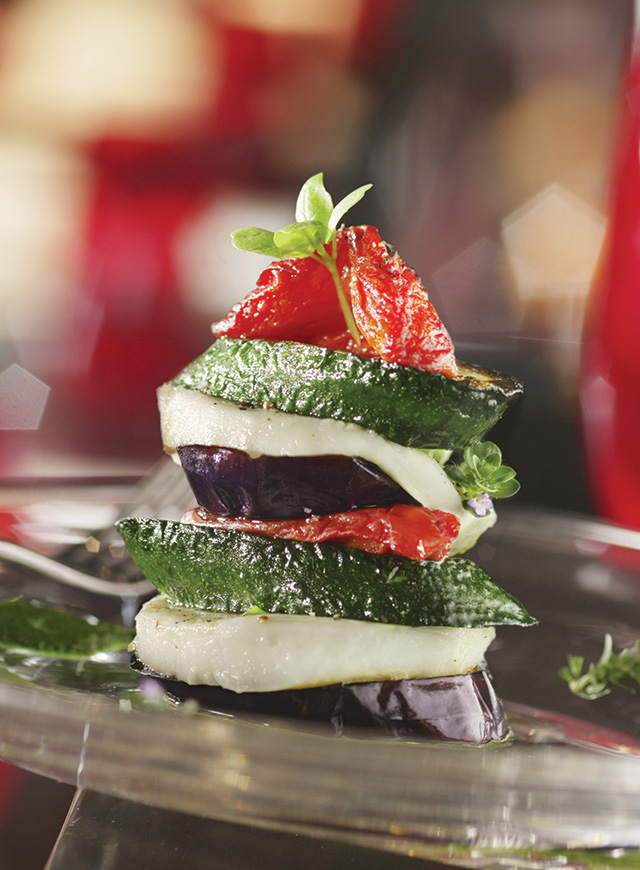 Merely mention the name Robuchon in any culinary conversation, and the accolades come pouring in. He’s a creative genius who has achieved perfection in his chosen field. Joel Robuchon isn’t quite six feet tall, but in the field of gastronomy, this man is a giant. French cuisine originally known and loved for its intricate blend of rich sauces and flavors was redefined in the 1960s, when Chef Robuchon — known by his students as the “Chef of the Century” — simplified French cooking with his legendary nouvelle cuisine.

Joel Robuchon was born April 7, 1945, in Poitiers, France, and early on he considered service in the church, which led to an apprenticeship in the church kitchen. That experience gave him insight; a passion was developed and his chosen profession was born. He received the prestigious Meilleur Ouvrier de France (outstanding French craftsman) award at age 28, and again at 31. In 1966, Robuchon became the official chef of Le Tour de France and in 1989, he was awarded “Chef of the Century” by the prestigious French restaurant guide, Gault Millau.

Mentor to renowned chefs Eric Ripert and Gordon Ramsey, Joel Robuchon is relentless in his pursuit of perfection. He’s the gold standard and his name is revered by chefs worldwide.  Joel Robuchon and his interpreter recently sat down with Travelgirl Publisher, Renee Werbin.

tg: You have some of the most highly acclaimed restaurants in the world. What are you looking for when you hire an executive chef to work for you?

JR: One of the first things I look for is the cleanliness of the person applying for the job. When you see a chef who has stains on his jacket you might think he’s busy and working all the time. Actually it’s quite the opposite. If a chef has mastered his craft and technique he should be at the top of his profession; his jacket should be stain free. He won’t cut or burn himself because he has the very best ability, knows what needs to be done and makes sure everything he needs to do is done properly. If you are at the top of your game you are a master of everything. Often you will walk into a kitchen and immediately notice the wonderful aromas. This is a mistake for a chef. An exceptional chef makes sure the flavors stay in the produce. If too much flavor escapes when you are cooking you will be missing the flavor when you are eating. You must keep the flavors and smells in the ingredients until the dish is served.

“I began traveling and sampling other cuisines and that taught me more than I had ever learned before.”

tg: What do you tell someone who wants to follow in the footsteps of the legendary Joel Robuchon?

JR: I want to emphasize — do the opposite of what I was told when I was young. I was told I needed to be inside my kitchen every day from the beginning to the end of the day, all the time. I began traveling and sampling other cuisines and that taught me more than I had ever learned before. French cuisine attaches great importance to flavors. I had to wait until I was 50 years old and started traveling to learn the importance of texture in food. When I traveled to Asia I saw people running shrimp under water for hours. At first I thought they were losing flavor but what I learned is that they were actually changing the texture of the shrimp. Asian cuisine values the importance of texture more than any other cuisine in the world.

My advice is to venture out and don’t always stay in your own kitchen. Go out, go travel; there is so much to be learned. I still want to travel to India, where I know I will learn a lot about the use of the variety of spices that are present in Indian cuisine. If you want to be a great chef, travel and learn about different foods and different cultures.

tg: Bravo! That’s what Travelgirl magazine is all about. Would you offer some advice to someone who has never cooked before?

JR: Yes, of course. First, you can’t cook things that you won’t enjoy yourself. Cook things that you will take pleasure in. It’s nice to please your guests but it must be something you like as well. It is of utmost importance to try to source the best ingredients for the dishes you are preparing, and be sure to keep it simple. Sometimes it is hard to make simple food that tastes great. Often, when you see dishes going wrong, you’ve tried to place too many things in one dish. Don’t put more than two to three distinct flavors in any one dish. If you follow this advice your success rate will be much higher. Put some LOVE in what you are cooking and as long as you do that, technically your dish might not be perfect, but you won’t starve.

tg: Americans love dining, and your restaurants in both New York and Las Vegas are treasured favorites. Do you see a difference in dining styles between Americans
and Europeans?

JR: One thing that I appreciate about my American clientele is that they rarely have pre-conceived ideas; they are very open to try new things. In Europe the tendency is to make up one’s mind before trying something; it’s very French. We know we aren’t going to like it before we try it and we don’t always give something new the chance it might deserve — and I don’t mean this in a negative way. I see people in the U.S. who have the ability to try something new and they do not judge it before it is tried, and I am grateful for this as it allowed me to create my restaurants the way I wanted them to be. I owe a lot to the Americans. because one of the first persons to really help put the word out about my restaurant Germain was Patricia Wells, the American journalist. She was quite a gift.

tg: One last question, what do you look for in terms of dining when you are traveling?  Where do you like to eat?

2. Core, blanch and peel the tomatoes, then cut them in quarters (nice petals) and throw the inside away.

3. Season them in a bowl with salt, pepper, thyme and olive oil.Delicately mix them, making sure they are all well seasoned.

4. Put them in a tray with parchment paper, sprinkle the powdered sugar over them and put them in the oven, letting them cook for 1 hour. Turn them over halfway through the cooking time.

5. These tomatoes can be preserved for 1 week in the refrigerator covered with olive oil.

6. Wash the eggplant and the zucchini, then slice them in 1 cm circles. Heat up a pan with olive oil. When it gets hot, cook the circles, sear the squash only on one side and the eggplant on both. Season them and put them on a paper towel.

7. Slice cheese and stack with vegetables. Dress the dish, decorating with the thyme.