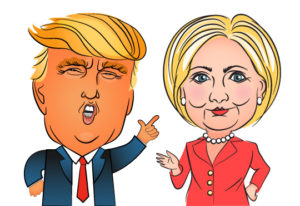 This year’s election of a new United States president will make history. For the first time, a woman is running for the country’s top job, and her opponent is not a seasoned politician but a businessman. While those circumstances will certainly be heralded and much studied, what does it mean to the savvy investor?

Although a change in leadership — especially if it’s a pivot from one party to the other — seems likely to impact market performance, a quick review of history reveals otherwise.
Despite the common opinion that the market performs better with a pro-business party in the White House, the country’s financial health, as evidenced by the Dow Jones Industrial Average, has achieved healthy double digit returns under both Republican and Democrat governance.

For 2016, leading financial pundits agree: the choice of Hillary Clinton versus Donald Trump is best made via ballot, not by investment vehicle. That said, there are five areas of public policy in which politically driven agendas affect government spending and have the potential to influence savvy investors’ investment choices.

Healthcare: insurers exiting exchanges
No matter how much talk about repealing the Affordable Care Act (Obamacare) goes on, it is highly unlikely this comprehensive and controversial program will be repealed. What is more likely is that Trump will set out to place limits on it, while Clinton will stay the course.

Limited or not, the ACA-created state insurance exchanges continue to struggle for commercial viability. Reportedly, it was $400 million in losses that led the country’s largest insurer, United Healthcare, to withdraw from exchanges in Arkansas and Georgia, and threaten to pull out of the remaining exchanges as well. In addition, Aetna, which is on exchanges in 15 states, just announced it will reduce its participation in four states in 2017, and Humana will go from 19 to 11 states. To date, 12 of the original 23 federally funded state insurance exchanges have failed, and analysis conducted by The Daily Caller News Foundation predicts that eight of the remaining 11 will cease operations by the end of the year. As state exchanges wind down, more individuals and families will find themselves buying coverage privately, through insurance companies such as WellPoint, United Healthcare, CIGNA, Aetna and Humana.

Entitlement programs: escalating financial outlay
While Clinton has been vocal about her intention to protect entitlements, she has offered no specifics about how she will finance this burgeoning fiscal responsibility. Trump, on the other hand, has proposed upping the qualifying retirement age for Social Security eligibility.

Increasingly, Americans are realizing that funding retirement will be squarely on their own shoulders. Employers have moved to 401k plans from traditional pension plans, and retirement plan providers are merging and leveraging scope and scale to provide cost competitive products. Recently we have seen the purchase of the retirement plan unit of New York Life by John Hancock and the creation of Empower Retirement, a subsidiary of Great-West Life, which took over the retirement businesses of JP Morgan and Putnam Investments. And, for the cost conscious, do-it-yourself investor, new “robo advisor” firms like Betterment and Wealthfront have emerged.

Defense: push for strong military to continue
Both parties have maintained that a strong military is essential when facing the global terror threat, which makes cuts to defense spending unlikely. Instead, we can look forward to ongoing debates about where additional defense expenditures should be made.

The Pentagon is pushing for additional funding to replace its 50-year-old inventory of nuclear weapons. Meanwhile market leaders Lockheed Martin, Boeing and Northrop Grumman are competing to oversee a $62 billion research, development and production effort designed to create a next generation intercontinental ballistic missile. Not all military spending evokes the same level of response and support from the legislative branch.

Smart investors should look for security-related spending to meet with less resistance than these “garden variety” defense proposals, But remember, most states have resident companies dependent on military contractors or even bases operating locally, which often changes the narrative from funding military strength to protecting local jobs.

Taxes: reform on the table again
The ongoing debate over taxes has given Clinton and Trump ample justification to put forward their own tax reform proposals. While the debate can be counted on to be heated, both leaders face pressure from the electorate to simplify the tax code, consolidate tax brackets and close loopholes.

With Clinton in office, taxes can be expected to go up, especially on high wage earners. Taxing those with high production to the exclusion of others could trigger a productivity decrease, which would further dampen an already depressed Gross National Product. As a result, high wage earners could decide not to expand their businesses, adding to today’s historically low participation rate in the job market.

On the other hand, Trump advocates a complete overhaul of the tax code, during which he says he would lower taxes on the middle class. He maintains that if middle class Americans had disposable income, they would be likely to spend it, jump-starting the economy. Retailers, such as JCPenney and Nordstrom, as well as discount chains, such as Target and Wal-Mart, would likely benefit. Additionally, Trump says he wants to incent corporations to bring offshore investments back to the United States, supposing that repatriated monies would fund stateside expansion in jobs ranging from manufacturing to call centers.

Dodd-Frank: increasing scrutiny from regulators
Banks and non-banking financial firms, such as hedge funds, will continue to function under the government’s watchful eye no matter which party leader is elected. The question becomes, how aggressive will that oversight be? Clinton has publicly dashed attempts to reform Dodd-Frank. Meanwhile, Trump maintains that governmental oversight of the banking and financial services industry is not only excessive but stifling to the economy as well.

Choosing to invest in dominant players such as Chase, Morgan Stanley and Bank of America might seem safer than taking positions in local community banks, but financial institutions of all sizes and types are waiting to see how vigorously the newly elected president will enforce the regulatory mandates already on the books.

Conclusions
While no one can predict the outcome of the coming presidential election, investors can rest assured knowing that making measured, informed financial decisions and keeping a long-term perspective in mind, will go further toward a positive financial outcome than using politically charged emotion to pick investment vehicles. History tells us there is no place for emotion in making investment decisions, and that tenet remains true even in an election year. Just think back to the 2008 election and corresponding stock market meltdown.  Not a happy time for many investors, but those who stayed the course were rewarded for their patience when the market rebounded beginning in March 2009.

MBA, CFP®, AIF® is a Principal with Atlanta Financial Associates. With more than 25 years of comprehensive wealth management experience, Julie has counseled clients through several election cycles. She specializes in holistic financial planning, asset protection and taxation strategies for physicians, professionals and individuals at or nearing retirement.