Even the name is musical, set in three-quarter time like its famous mood-elevating waltzes. Recognized as the world capital of music, Vienna has been the home to Beethoven, Brahms, Haydn, Mahler, Mozart and Strauss – just to name a few.

I was on my first visit to experience this capital city and wanted to take it in with all my senses. I would taste the traditional foods of schnitzel and sausage, see the magnificent soaring baroque buildings, touch the fine fabrics of silk ball gowns, smell the aroma of fresh pastries in a coffee house and yes, hear orchestras play those uplifting waltzes.

It’s a place where people in ball gowns purchase sausages from stands on the street, coffeehouses have been functioning as residents’ second living rooms since the 1680s, and a 14th-century Gothic St. Stephen’s cathedral is a stone’s throw from the post modernistic concrete-and-glass Haas Haus.

The author Sándor Márai wrote, “Vienna wasn’t just a city, it was a tone that either one carries forever in one’s soul or one does not.” Here are five places to seek your own tone in Vienna, with an intro lyric from some more contemporary musicians.

1. “Let’s dance, put on your red shoes and dance the blues.” From “Let’s Dance” by David Bowie

Where there’s music, there’s dancing right? Vienna is famous for its balls. The ball tradition here began about 200 years ago, and now the city hosts 450 balls a year. The season lasts from November 11 to Ash Wednesday, peaking in January and February. Generally, anyone can purchase a ticket to any ball, starting at around 60 euros. Dress is typically long gowns for the ladies.

And lucky me, I was there during ball season so got to create an entry for my own princess diaries. One enchanted evening, I ascended the marble stairs of the Hofburg Palace carefully in my gorgeous (rented) gown sporting a sophisticated updo and make-up and thus began one of the most elegant evenings of my life. We were guests at the The Coffeehouse Owners’ Ball held over several levels of the palace. Balls traditionally last until 5:00 a.m. so we had several glorious hours to promenade through all the various rooms, eat sausage, drink champagne, and waltz to the strains of Johann Strauss.
If you’re not there during ball season, you can still take a ballroom dance lesson at one of Vienna’s most famous dance institutions, where Viennese have been perfecting their dance steps since 1919. The distinguished, and ever-so-patient Thomas Schäfer-Elmayer led our earnest-yet-giggly group through the steps of both the waltz and the quadrille, which we performed that night with questionable grace but with lots of laughter.
Elmayer is the third generation of his family to run Tanzschule Elmayer and claims that anyone can learn the Viennese waltz in an hour. Test his theory by attending the one-hour class offered every Saturday.

2. “Yeah, my mama she told me ‘don’t worry about your size.’” From “All About That Bass” by Meghan Trainor

Take that advice because to truly experience Vienna, you have to indulge in the flavors of the city, and we aren’t talking health food here. Let’s start with the sausage stand. Popular in Vienna since World War I, it’s the city’s traditional fast food experience, with several stands located throughout the city.

Next up on the yummy/unhealthy chart is schnitzel, made with a veal cutlet that’s been pounded thin, breaded and fried. It’s served with a lemon wedge for squeezing juice on top – the only low-calorie thing about it.
For a snack after our rigourous dance lesson, we indulged in several varieties of tea sandwiches at Trzesniewski, founded 113 years ago. They sell 22 varieties of sandwiches, which pair well with Champagne and small mugs of beer.
You can’t leave Vienna without a trip to a cafe, and the sugar coma from the pastries at Cafe Landtmann was worth it. An institution in Vienna, this popular cafe dates back to 1873. Everyone from Sigmund Freud to Paul McCartney have lifted the delicate coffee cups here. You’ll find dozens of traditional cafes throughout the city, with people savoring pastries, sweets and steaming cups of coffee.

3. “Stroll around the grounds until you feel at home.” From “Mrs. Robinson” by Simon and Garfunkel

Half of Vienna is green space, with most of that is open to the public, easily accessible by walking or hopping on the easy public transporation system.

One afternoon I wandered through The Prater, a large amusement park and home to a giant Ferris wheel, founded 250 years ago when Emperor Joseph II opened the former royal hunting  grounds to the public. From there I wandered through Stadtpark, stopping to view the statues of famous musicians and composers. Crowds vied for optimal selfie photos in front of the Johann Strauss monument.

It’s worth the short tram ride out of town to tour the magnificent gardens at Schönbrunn Palace, Austria’s most visited sight and the former summer home of the Hapsburgs, dating back to the 1500s. Either before or after touring the splendidly furnished 40-room Royal Apartments, tour the sprawling yet meticulously manicured gardens with a playground, whimsical fountains and kid-friendly maze with a large towering monument, the Gloriette.

4. “But if you walk the footsteps of a stranger, You’ll learn things you never knew you never knew.” From “Colors of the Wind” from Pocahontas

Vienna is home to around 100 museums, focusing on everything from fine to contemporary to fantasy art to many only-in-Vienna collections like the Emperor Franz Joseph Hat Museum, the Chimney Sweep Museum and even one entirely devoted to the movie The Third Man.

Narrowing it down was tough, but I opted to visit the homes of two of the city’s most famous residents, following in their still-celebrated footsteps. How did Sigmund Freud, the father of psychoanalysis, live? The Austrian neurologist established his medical practice in Vienna and lived in the home for 47 years until forced to flee from the Nazis in 1938. His hat, cane and even his flask are still in what is now the Sigmund Freud Museum. I was most fascinated by his waiting room, where anxious patients awaited their turn to lie on the famous couch.

By contrast, Mozart only lived in what is now Mozarthaus Vienna Museum from 1784 to 1787 and there is little furniture. Yet, it was still a thrill to wander the empty rooms, looking at views he would have looked at, and breathe in the space where he wrote The Marriage of Figaro and hosted his own lively balls that lasted into the wee hours.

5. “When will you realize, Vienna waits for you?” from “Vienna” by Billy Joel

There’s so much to see in this city that our tours just touched on several highlights. Our hotel, the new Grand Ferdinand, had a perfect location on Vienna’s grandest boulevard known as the Ringstrasse, also referred to the Ring Road, built 150 years ago by Emperor Franz Josef to replace the 13th-century city walls. We could easily walk to several of my favorite sights, including the world-famous State Opera House and the shopping streets of Kärntner Strasse and Mariahilfer Strasse.

To get a good overview of Vienna, take a tour of the entire length of the Ringstrasse on a tram or ride a bike on the cycle path. With more than 600 miles of bike lanes and flat terrain, Vienna is a perfect city to see on two wheels (and work off a few of those sausage/pastry/schnitzel calories!) Rent a bike with the bike share program, Citybike Wien, or take a guided tour with Pedal Power, located near the Opera.

One of the most moving sights was the Judenplatz Holocaust Memorial, also known as the Nameless Library, built to honor the 65,000 Austrian Jews who were killed during World War II. The concrete cube looks like a library with the books with spines facing inward, to symbolize the untold stories of the victims’ lives.

For fun people watching, plenty of market stalls and a wide selection of small cafes with a every type of cuisine, visit the huge outdoor Naschmarkt. That’s where I purchased my only souvenir – a bag of Viennese coffee. But I’ll carry the tone of Vienna with me always. 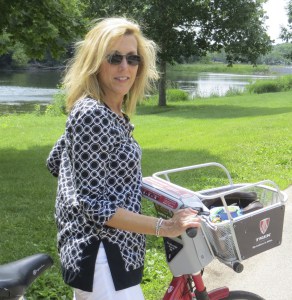 Contributing Editor and Editorial Director of The 100 Companies.