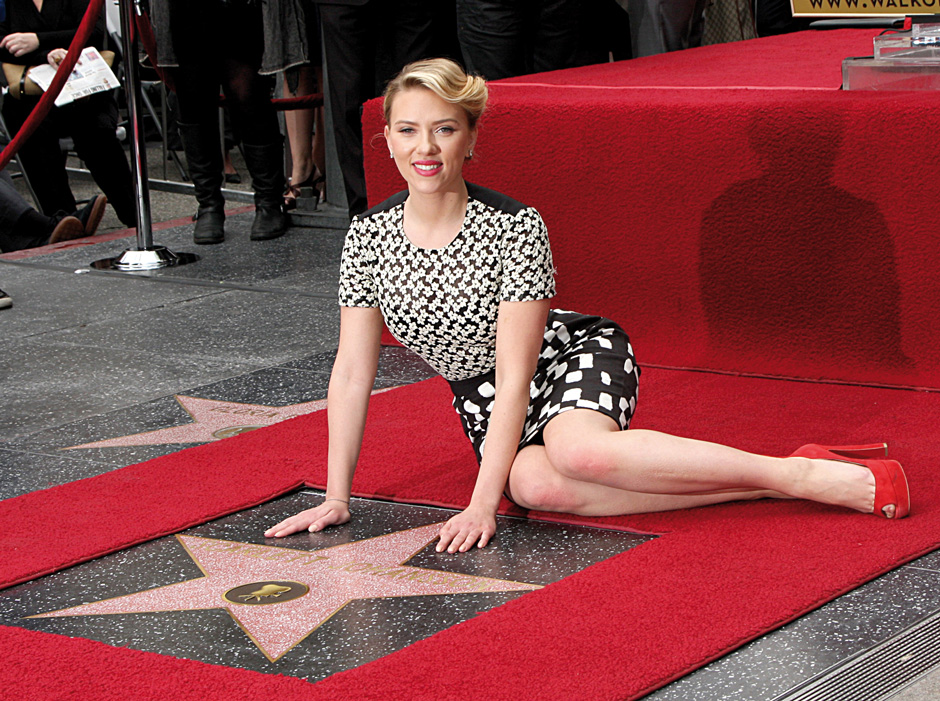 Scarlett Johansson receives her own Star during Walk of Fame Ceremony on Hollywood Boulevard on May 2, 2012, in Los Angeles, CA. PHOTO by: JEAN NELSON 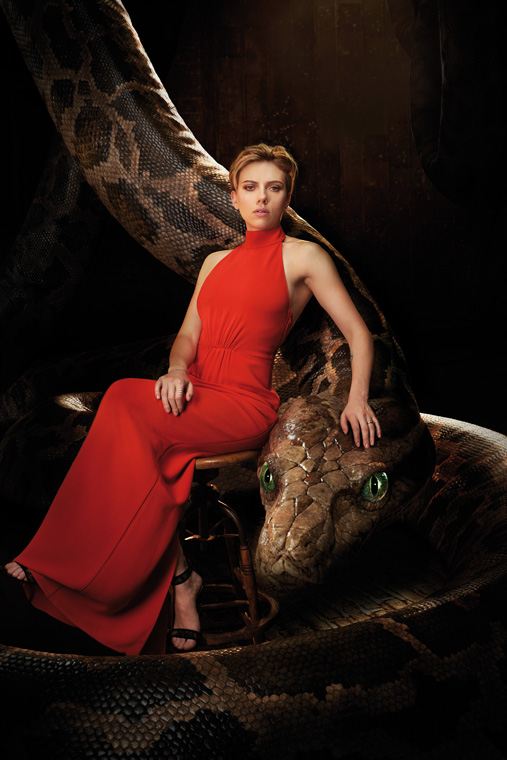 Scarlett in The Jungle Book

Scarlett Johansson voices the character of Kaa in Disney’s current movie, The Jungle Book. Kaa is a massive python who uses her voice and hypnotic gaze to entrance Mowgli (the little boy played by Neel Sethi). PHOTO by: Sarah Dunn. ©2016 Disney Enterprises, Inc. All Rights Reserved. 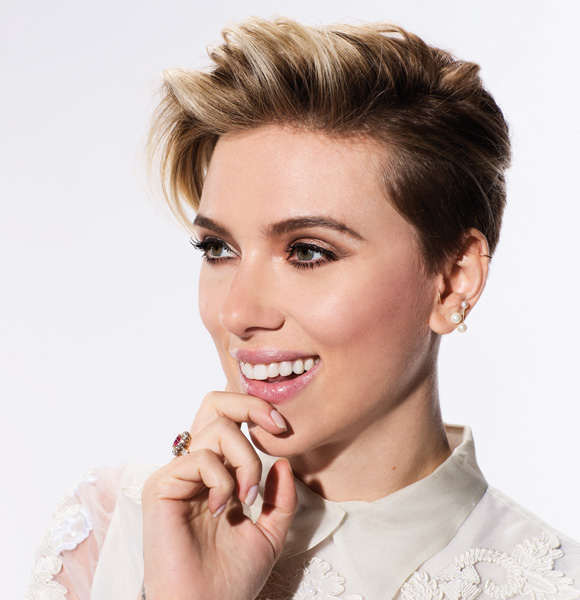 There was a lot of enriching activity when I was growing up in New York.

She was only eight years old when she made her professional acting debut in the off-Broadway production of Sophistry with Ethan Hawke. Today Scarlett Johansson is a screen icon with a long list of legendary film credits, whose career exploded after her breakout role opposite Bill Murray in Lost in Translation. In fact, she’s so successful that the website Box Office Mojo recently listed her as Hollywood’s top-grossing actress, with film earnings of more than $3.3 billion.

Perhaps you’ve seen The Horse Whisperer, Ghost World, Girl with a Pearl Earring, Vicky Cristina Barcelona, The Nanny Diaries, The Other Boleyn Girl, Hitchcock or The Avengers — those are just a few of the films that show off her incredible screen presence.

The multi-talented superstar is also a Tony award winner for her performance in A View From the Bridge. She’s gracious, gorgeous and philanthropic and known for her sultry, deep voice. Currently, her voice has a starring role in The Jungle Book — she says she had a glorious time voicing the role of Kaa, the snake. Ms. Johansson can also be seen in her recurring role as the fictional superhero Black Widow (Natasha Romanova) in Marvel’s Captain America: Civil War. It’s an honor to have her on the cover of our summer issue.

TG: It’s a pleasure to welcome you to the cover of Travelgirl Magazine. We are honored to have you. You grew up in one of our favorite cities, New York. Did growing up in a city so rich in theater and film have something to do with your desire to become an actress?

SJ: There was a lot of enriching activity when I was growing up in New York. Back when I was young, casting directors would organize their Los Angeles casting and then would fly to New York to see all the actors working there before making their final decisions. I don’t know exactly what formulated my decision but growing up in New York certainly made it easier to become a successful professional actor. I grew up going to the theater and dance performances. I had so many opportunities because New York is such an incredibly alive and diverse city. It’s inspiring artistically and is filled with prospects that allow you to learn and hone your craft.

TG: Your grandfather was a screenwriter and director and your mother became a producer. Did the fact that they were involved in film help guide your choice to become an actor?

SJ: My mother became a producer after I was already working; she started producing when I was 15, and by that time I had been working for eight years. I never knew my grandfather; he was my father’s father and he was a successful radio producer in Copenhagen, which is such a different world than the Hollywood world that I grew up with. My mom was always a great movie lover; she is somewhat of an encyclopedia for film, and I think she has incredible taste as far as movies go. I guess my interest in film must have stemmed from her enthusiasm for cinema. I think the fact that I took it on as a calling allowed my mother to experience the other side, the production side of film. She got to see the practical side of movie making, and she probably would have never had that opportunity otherwise — somewhat how one hand helps the other. I cannot imagine what it must be like to have a child become successful; it must be a thrill but you would have to ask her.

TG: It sounds somewhat like you mentored each other.

SJ: I think in a way we did. Of course, it is always much easier to imagine a parent mentoring a child, but as you get older and things change, you learn a lot from one another. We inspired each other in different ways over time.

TG: Would you talk about your singing and the impact musical theater had on you?

SJ: I took many, many vocal lessons when I was growing up. When I was a kid, part of becoming an actor was training you to become a triple threat. They wanted you to become an actor, a singer and a dancer. I never managed the dancing part fully but I always loved to sing. I used to imagine that I would star in a great musical like Oklahoma; growing up I always loved Broadway. Also, I have such a deep voice. This very specific deep voice came out of me — this tiny, blonde person — and it was a really unusual voice for a kid. I put singing on the back burner. My dreams of being in a musical such as Meet Me in St. Louis kind of faded away for a time. As I got older, I had several boyfriends who were musicians and I always liked to sing. After hearing me sing on a friend’s album, Warner Brothers contacted me. They knew I loved to sing and loved the style of my voice, and they wanted to know if there were any types of musical projects I wanted to do. Eventually I did an album for a collection of Tom Waits covers. It was an amazing experience and I enjoyed every moment. I’ve continued to work on several musical projects. I voiced Jungle Book and I sang Trust in Me from the original Disney score produced by Mark Robson. It was terrific and fun and I enjoyed it tremendously. I have had a lot of great opportunities to delve back into music and it’s so nice to return to that genre every so often.

TG: You were a student of acting school; would you recommend that for those budding young hopefuls who want to become actors one day?

SJ: I think drama school is an amazing way not only to explore methods of acting, but also to build confidence. It’s a terrific way to learn how to express yourself in a safe environment and to learn how to be free with your thoughts and your voice. It allows you to put yourself into challenging situations. If you want to become an actor then drama school is a wonderful path to help you accomplish your dreams. Acting is incredibly competitive. If you are going to follow that path it’s important to understand what you need to do to get there. It affords you the opportunity to figure out if acting is something you like and want to pursue. I absolutely recommend it; it was a wonderful experience for me.

TG: Which is more rewarding for you, acting in a film or acting on stage?

SJ: Both are rewarding, but in very different ways. When you work on stage you are living and breathing with the audience. The people in the audience are both experiencing a part of the performance and also part of the experience. It’s the mutual give-and-take that is just exhilarating. It’s dangerous, as you don’t really know what will happen. You can imagine doing the same play, six months straight, eight plays a week, and you wonder ‘How will I go on every night?’ — but you just don’t know what will happen each night and it’s a great opportunity. Film is more cerebral, it’s a very different medium and a big part of it is your relationship with the camera and the operator. You have a much smaller audience. You are focusing on one very particular moment and the elements that lead up to that moment. It’s a totally different experience, but both are very rewarding in their own way.

One of my favorite travel destinations is New Orleans; I love that city and can never get there enough.

TG: Do you have a favorite travel destination that you love to visit when you have a moment off from your busy career?

SJ: One of my favorite travel destinations is New Orleans; I love that city and can never get there enough. I have good friends that live in the area, and I will always return there my whole life. It’s just such a magical place. The spirit of the people is so sexy. New Orleans is soulful and welcoming — just such a great town to be in — so full of character.

TG: Travelgirl agrees with you. Our editor-in-chief moved to New Orleans a few years ago and couldn’t be happier living in such a vibrant place. Is there a travel destination you haven’t visited — one that’s on your bucket list?

SJ: I have been to India before and visited Varanasi and New Delhi, but that trip was just a few weeks; it wasn’t nearly long enough. I would love to be able to explore all the different parts of the country. The people are so incredibly inviting, warm and wonderful. I want to take a train around India and just get lost there for some part of my life. It’s a place I will definitely return to; I loved the people, the country and the warmth I felt there.

TG: Would you talk about Soles 4 Souls? You’ve been incredibly supportive of this and so many other worthwhile charities.

SJ: Soles 4 Souls is an awesome organization. I’ve helped fundraise for their cause. It’s a charity that’s so easy to support; you don’t even have to think about it. You can literally clean out your closet and make a difference in someone’s life. Spring-cleaning feels like something you can’t say no to. I also continue to work with Red, a huge fundraiser in the fight against the spread of HIV AIDS. Red partners with corporations like American Express and Converse to continue the effort for the conscious consumer to support the Global Fund, which supports the Atlas team in Africa that is struggling with HIV AIDS, and continues to provide not only anti-viral treatments but also to provide education to the people living with these diseases. The number-one preventive measure is to educate people. It’s a great cause and a great charity that I’m so proud to be associated with.