Mädchen Amick is an actress whose resume reads like a Who’s Who of television. She has appeared in such well-known shows as Mad Men, ER, CSI: NY, Californication, Gilmore Girls, American Horror Story: Hotel, White Collar, Psych and Law & Order. She is best known for her roles as Shelly Johnson on Twin Peaks, its prequel, Twin Peaks: Fire Walk With Me, Tanya Robertson in Sleepwalkers and Wendy Beauchamp in the Witches of East End. She most recently can be seen as Alice Cooper on Riverdale and reprising her role on the limited series revival of Twin Peaks.

tg: What was it like working with David Lynch on such a groundbreaking show?

Mädchen Amick: It took me by surprise “back in the day” when it premiered. I knew that David Lynch on television would be controversial, but I was very surprised and happy that it was so well received.

tg: You have a long and impressive list of television credits. Do you have a favorite show?

MA: That’s a hard one because I’ve been on a lot of shows that were fun to work on and then others that were very satisfying creatively. I would say that Twin Peaks is very special to me on both of those levels. It sent my career on a very specific and special journey. But I have to say that Freddie was fun to work on as well because it was well written. It was a lot of fun to do a comedy. I also met two of my now closest friends, Freddie Prinze Jr. and Sarah Michelle Gellar-Prinze. In addition to those two shows, Witches of East End was absolutely a “lightning in a bottle” experience in the way that the main cast bonded so quickly and deeply. I’m still incredibly sad that the show was canceled so hastily.

tg: Let’s talk travel! You were recently invited to Puerto Vallarta and stayed at the Grand Fiesta Americana Hotel. Tell me about your Mexico experience.

MA: Mexico holds a very special place in my heart. I used to visit there often as a young girl with my late father, William. We loved going to Laredo and Cabo San Lucas. Then, later as an adult, my husband and I visited Costa Careyes as newlyweds. That ended up being the last “official vacation” we took before embarking on our journey to busy careers and family life. After I wrapped the first season of Riverdale, Grand Fiesta Americana extended an invitation for my husband, David, and me to come relax for a week and we grabbed it! It ended up being a much needed and, after 25 years, a very romantic vacation.

tg: What destinations are still on your bucket list?

MA: I’m dying to spend a month of relaxation in the South of France and/or the Italian countryside. I haven’t been to Asia yet; I’m very curious about it. And, I also have a dream of seeing the Mayan ruins in a “non-tourist” kind of way, if that’s possible. To be honest, I’m a Sagittarian and I love to travel, so quite frankly, my bucket list includes the entire globe!

MA: Hawaii. I have a deep connection to those islands for some reason. I feel so at home there. I especially enjoy the North Shore of Kauai. 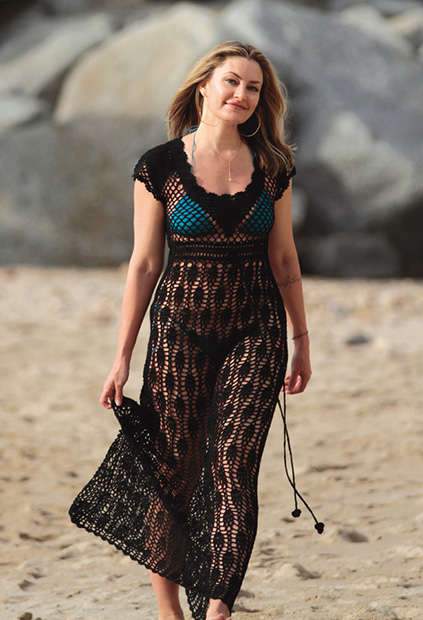 tg: What one item do you always take when packing for a trip?

MA: Hopefully I’m always going to a tropical location, so the smallest bikini to get the very best tan.

tg: You play the piano, guitar, bass and violin. Why did you want to play so many instruments?

MA: Well, I’m proud to boast that as a young girl, after I learned the piano — my first instrument — I then learned to play the upright bass. I could barely reach around the instrument. My dad was the leader of the ‘Bobby McGee Band’ and was also the bassist. He was a fundamentalist. Not unlike learning to drive a stick shift, he wanted me to learn the proper string instrument first, before moving on to the electric bass.

I’m proud to say that I’ve always sought out and have been blessed with playing strong, complicated female roles.

tg: You’ve had roles on some incredibly prominent television shows, including Mad Men, CSI: New York and ER, and you are currently working on Riverdale. Do you have a favorite role? If so, what made it so special?

MA: I’m proud to say that I’ve always sought out and have been blessed with playing strong, complicated female roles. My favorites are Shelly from Twin Peaks, Wendy from Witches of East End and now the very complex Alice Cooper in Riverdale. I love it when the character challenges my own natural instincts.

tg: What prompted your interest in acting? Can you give our readers some sage advice for those budding young hopefuls who want to forge a career as an actor?

MA: I was born an artist. I just had to keep trying different art forms until I found the one that most spoke to me. As a young girl, I fell in love with the cinema. I would sneak away and see two or three films in one afternoon. I then fell in love with acting when I followed my best friend into high school theater.

The biggest advice I can give anyone aspiring to become an actor is that you have to be prepared to be in it for the long haul. It takes a lot of perseverance and hustle to become a consistent working actor.

It takes a lot of inner belief and self-confidence to withstand all of the rejection that will inevitably come your way. But if it’s your dream and you know this is the thing for you, then go for it. Don’t let anyone discourage you. Believe in yourself. And most importantly, enjoy the journey along the way.

When I look back on my career, I don’t remember the specific scenes or dialogue. I remember the people whom I worked alongside and with whom I had a deep connection.